I am doing WWOOF – a month-long programme where I am working on a French farm.  I am writing a daily blog about my experiences.  I will write in English and French.  My French isn’t perfect and there will be mistakes.  And I may use Frenglish.  I welcome all corrections.  I tend to transliterate more than translate, but I’m working to improve this.  Considering this, the French sections of the blog won’t be exact word-for-word translations from the English.  Firstly, the language doesn’t work like that and secondly, I make jokes and references in the English that won’t translate over to the French.

Paris! Here I come.  I have three French friends, Mai-ly, Marion and her boyfriend Alex, whom I’ve been wanting to see since I arrived in France.  Unfortunately, they don’t live anywhere near Normandy; Montpellier and Bourgogne, respectively.  We agreed to spend a day together in Paris.  And that day has finally arrived.

It started bright and early with Matthias kindly driving me to Diueppe station.  I was worried I might have to take the bus.  From there, I took the 7hr51 train to Rouen-Rive-Droite where I had to change trains.  It’s mandatory that you “comporte” or validate your tickets, before you board the train.  However, at Rouen, you have to surface to use the comporter machine, which is at the entrance of the station, which I think is a bit silly.  What if you’re in a rush to catch your next train?

But when I was ‘comporting’ my ticket, I noticed that Rouen has a table football table, which is awesome.  I know that the French love their table football.  Anyway, I booked the 8hr59 train to Paris-Saint-Lazare.  The trains are double-decker, which is cool.  What’s not so cool is that the seats aren’t numbered, so I have no idea whether I was in my correctly assigned seat. 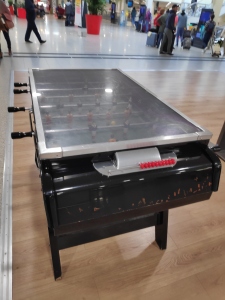 This didn’t matter in the end, as there wasn’t any ticket inspectors.  Anyway, I arrived at Paris-Saint-Lazare at 10hr46.  I really needed to pee, but I wasn’t paying 90 cents for the station toilets, so I headed down into the Paris Metro.  When I used the Metro in 2015, it was very confusing – far worse than the London Underground, but this time was far better.  True I took one or two wrong turns, but it was all good.  I arrived at the rendeyvous of Palais du Garnier – or the Paris Opera House at 11hr15.

My friends were all running late, so I walked around Paris and found these sites.

Is coke legal in Paris?

This shop should rename itself to Myanmar. 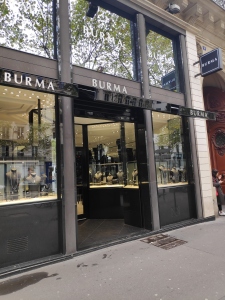 I still needed to pee, so I hunted down a Mcdonalds.  I thought the toilets would be free, but they were 50 cents.  I know that I should have really bought something, but still…50 cents! But I was desperate, so I went.  I returned to the Opera House, where I witnessed some drama between a busker and some fake charity scammer people.  They kept trying to get people to sign up to this list, despite how the police caught them.  And the busker didn’t like this…not at all.

But it was great being back in a city.  It was like I was back in London.  The Opera House reminded me of Piccadilly Circus.  It was refreshing to hear non-French accents, American, German and even English.

Anyway, I met Alex and Marion at 1 and we had lunch.  While I was exploring, I found a creperie, so we ate there.  Although, I had more of a savoury galette with ground beef and onions.  I would have taken a photo, but I was too damn hungry.  But over lunch, we caught up and I explained more about my farm work.  Afterwards, we went to meet Mai-ly and her friends Lucas and Clemence.  They were in Pompidou and we met them in a Westfield Shopping Centre where they had some type of music event with some old-school tracks.  I was tempted to yell “2000 called.  It wants its music back,” but I wasn’t sure whether that would translate into French. 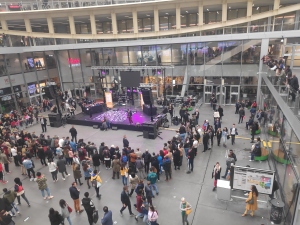 Tomorrow, it’s Elisabeth’s birthday, so I bought her some chocolates.  Initially, I didn’t want to spend too much money, but I decided “I don’t care.  Fuck it.” Except, I said that in French and everybody laughed.  People always find it funny when I swear in French.  I don’t know why.  But we tracked down a chocolatier where I bought some choccies for 12 euros. 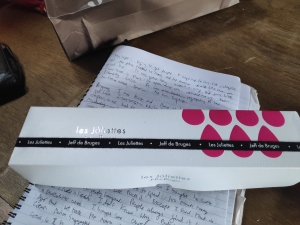 After that we took the Metro to Montmarte to see Sacre-Coeur.  Marion suggested Montmarte and Elisabeth suggested Sacre-Coeur, so I thought I could kill two birds with one stone.

Out of all of us, Alex knew Paris the best, so he was our navigate.  We reached Sacre-Coeur and climbed the many steps to the top and saw the terrific views.  As it was a trek to the top and it was nice weather, my English nature kicked in and I suggested we get a beer.  After battling through the crowds, there were gazillions of tourists, we found this Irish-style pub.  I bought a pint that cost me 8 euros, which is now the most expensive pint I ever bought.  But we were right by Sacre-Coeur, so it makes sense.  But I didn’t really care.  Fuck it.

I recalled my various language errors – like the “je suis plein” incident from the first night.  Also, in Bergerac, after my friends and I finished eating in a restaurant, the waitress asked us how was the food, I wanted to say “I loved it,” instead I said “I love you.” Awkward.

Also while looking at my phone, everybody commented on my cracked, dirty phonescreen protector.  And I defended myself explaining that I am very clumsy with my phone, I’m always dropping it.  And Marion took this chance to tell everyone, how I dropped an old phone down the toilet in 2017, the day before I went to Bergerac.  Thanks for telling everyone! Lol.  Alex explained that at lunch we ate crepes.  As I have been living in Normandy, it’s my duty to eat crepes.  Mai-ly asked me what food I’ve been eating in Normandy and I replied, in French, “fruits du mer” or seafood.  But with my imperfect French, it sounded more like “fruits de la mere,” or fruits of my mother.  Basically, it sounded like I was saying that I’ve been eating my mum.

Speaking of food, I also asked everybody’s opinion on what this mystery food was, remember? They all suspected it was pate, but there was no consensus.

In the pub, there was a photo machine, where we all took some photos.  And of course, we all took selfies.  We are Millennials after all.

And suddenly, it was 16hr30, and it was time for me to head back.  While entering the Metro, Lucas used his Metro card to pay for me, when my ticket didn’t work, which was good of him.  I remember when I was in Paris, all of the little paper tickets were a nightmare.  I could never remember which ones were valid and which weren’t.  But I said goodbye to everyone at 17hr and ran to catch my 17hr09 train.

Just to add to my stress, the e-gates wouldn’t scan my ticket, but a kind stranger let me go through the gates with him and I made it onto the train.  It was really nice seeing Marion, Mai-ly and Alex again.  I met Marion and Mai-ly in 2017 on the mobile app Hellotalk – an IM service that connects you with native speakers of your chosen language.  I would definitely recommend it for anyone learning another language.  In 2018, I met Mai-ly properly when she visited London.  Last July, I met Marion when she and Alex visited London.

Today, my French wans’t perfect and my listening wasn’t the best – I couldn’t always understand everything, but in fairness,  as everybody was young, they were all speaking a more informal French than I’m used to.  But, for the most part, I could make myself understood.  I arrived back in Diueppe at 20hr where Mathtias drove me back to the farm.  We arrived at 20hr30 and Matthias told me that the goats had broken into the breakfast room and caused this mess.  They’ve also eaten my breakfast for tomorrow.  And best of all I get to spend my day off tomorrow cleaning this mess up.  Why would you do this, goats? 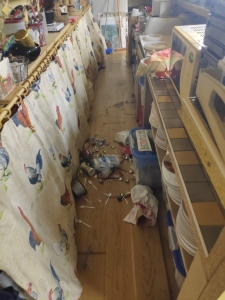 Anyway, we had dinner at 21hr.  We were joined by Pascale – Elisabeth’s Parisian friend.  She was very interested in what I did today.  Guess what term I had to explain again? That’s right.  Luddite! That’s the third time now.  Also Matthias remarked that while he and Elisabeth correct my imperfect French, I don’t correct their imperfect English.  It’s true.  I don’t know why.  But one thing I’ve noticed that Matthias does is transliterate rather than translate.  I do it too! It’s the easiest method, but it doesn’t always convey the meaning of what you’re saying.

For example, instead of saying ‘wait for me,’ or ‘open for me,’ Matthias says “wait me,” or “open me,” he omits the ‘for’ as that’s how it’s said in French.  The French say “attendez-moi et ouvre-moi.” But I think rather than being fluent and speaking 100% correctly, it’s far more important to be understood.  Obviously it’s good to know the grammar, but not necessary.  I’ve heard some French say that they can instantly tell if a foreigner is foreign from the way they say ‘bon’ in ‘bonjour.’  After dinner, Matthias and I caught Jack, which was a lot easier than Thursday.  True, he still protested, but after he ate my breakfast, I have no sympathy for him.

And that’s all for day 28.  A day of crepes, buskers and con artists and old friends and new.

Alors, on a escaladé beaucoup escaliers to reach the top ou on a vu des jolies landscapes.